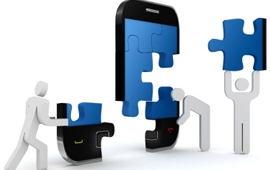 Mobile app development has exploded over the past few years, and it’s no surprise that NOW it looks to be an even bigger year for it. Better technology, better tools, more developers, and better ideas, are contributing to the rapid growth in the industry. Here are some trends to keep an eye on in the year to come.

More OSes to Develop For

iOS and Android still dominate the landscape, with Windows Mobile and BlackBerry trailing behind. But now we will see the growth of new mobile OSes, such as Mozilla’s mobile Firefox OS, a mobile Ubuntu OS, and Sailfish, a proprietary OS created by former Nokia engineers. Many of these new OSes are aimed at creating smartphones inexpensive enough to reach all economic levels, and phase out feature phones entirely. More people will be able to purchase their first smart device than ever before, especially in emerging markets. This means, among other things, that the fragmentation problem mobile developers currently have is only going to get worse.

More Processing Power to Play With

Apple stepped up its game by releasing its 5S iPhone with a chip that has a 64-bit processor, leaving other phone and chip makers scrambling to catch up. Both Qualcomm and Samsung have promised to deliver chips with comparable processing power. And when they do, mobile app developers will have quite a bit more power to play with when designing apps for new mobile devices.

Experts are predicting that, people will own even more mobile devices, not fewer — up from 5.7 devices per home in 2013 to 6 or more devices per home. And users will be looking for exceptional experiences on each device. We’ve just recently started seeing new kinds of mobile devices, or wearables, such as smart glasses and smart watches. Although it might still be awhile before wearable devices start going mainstream, mobile developers will need to be aware of performance issues on each new type of device and screen.

People are using two or more connected devices at the same time to interact with each other via specialized apps. For instance, the Xbox One has its SmartGlass app, which allows users to use their smartphones as a remote hub to control their Xbox Ones. Expect more such apps to come down the pipe this year.

Google just recently bought smart appliance maker Nest, after Nest released a smoke detector controlled entirely by a smartphone app. Samsung also recently released a washing machine controlled by Wi-Fi. In addition to smart TVs and video game consoles, should see a boom in more connected objects in the household such as appliances, as technology improves and companies start to play with the possibilities of the ‘Internet of Things.’

So what’s in it for you, the mobile developer?

Currently, according to a survey from Vserv.mobi, 47 percent of the mobile developer base is comprised of indie developers. But indie developers and smaller companies may have trouble keeping up with the ever-increasing fragmentation problem, and being able to optimize their mobile apps for enough devices. The trade-off is that for each new device and OS that an app needs to be optimized for, there’s also a potential for new revenue to be gained. We may see an increase in partnerships, mergers, and hiring for indie developer shops, to help cope with the demand.

The enterprise is continuing to invest heavily in mobile, and Apple is expected to fill the gap that BlackBerry has left. Enterprise apps also tend to generate way more revenue than consumer apps, so this might be a good opportunity to stake a claim to all that cash on the table, especially for Apple enterprise app developers.

Using third-party services (like Parse and Appcelerator) to assist in mobile app development efforts will free up precious developer time, allowing them to focus their efforts on serving their customer base with amazing user-experiences. And of course excellent app performance will continue to be the key factor in enabling app developers to stay ahead of the competition, so mobile app performance monitoring tools will play a key role in keeping customers loyal.

What trends are you seeing pop up in your corner of the mobile development industry? Share your thoughts with us in the comments!